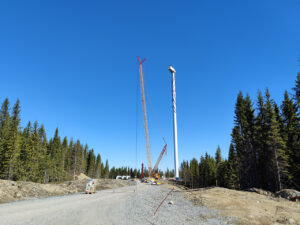 The thaw period has finally passed at Björkvattnet. The ground conditions were being closely monitored and inspected during the thaw period to ensure heavy machinery could continue to operate safely.  The geotechnical engineers have been monitoring the ground temperature at crane hardstands with in-ground measurement rods and the latest results of the heavy fall weight testing, supplemented by visual inspection, shows the thaw is now complete and bearing capacity is suitable.

The team at Björkvattnet have been busy tidying up the site this month, removing materials and machinery that are no longer required on site.  As there is now only one turbine that requires installation, two of the three main cranes (used to erect the turbines) have been dismantled and removed from site, and most of the installation team have de-mobilised from site and moved onto other projects.

To summarise the status, Main Installation is complete on thirty (32) turbines; commissioning works have been completed on twenty eight (28) turbines; and twenty five (25) turbines have completed their reliability run, the 8-day performance test and final stage before the turbine is considered operational. The Centre and South East areas of the wind farm have achieved operational completion, which equates to two of the five sections of the wind farm.

June will see a continuation of internal works, commissioning, test runs, and installation of the final components for the last turbine. Also, operational completion of the South Centre and South West sections are expected to conclude. June should also see final civils works to leave the wind farm in its finished state, including the removal and reinstatement of the on-site storage area.